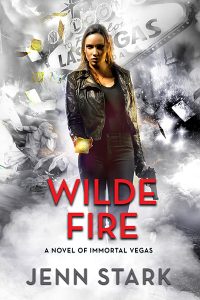 It’s the end of the world as we know it…

The war on magic is here, and Mistress of the House of Swords Sara Wilde has done everything she can to prepare. The Arcana Council has recalled its most powerful members to hold the line, and the Houses of Magic are frantically strengthening their defenses. Then the first volley hits: a plague of demons freed to ravage the earth. Scrambling, Sara discovers that the war will be fought not on one front, but three—while new threats emerge at a breakneck pace.

All the magic in the world may not be enough to save it.

From an ancient coven in Chicago to the sunbaked streets of Vegas to the frozen ice fields of Antarctica, Sara rallies her closest friends and fiercest enemies to protect the earth from the gods and monsters raining down from the dark side of the veil. To succeed, Sara must confront the truths she’s been avoiding her whole life, and take on forces that have kept the Connecteds powerless for far too long. But is she willing to make the ultimate sacrifice?

When it comes to Armageddon, where there’s smoke there’s always Wilde Fire.