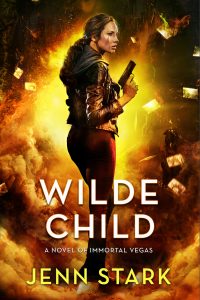 No matter the job, no matter the client, Tarot-reading magical artifacts hunter Sara Wilde has only one hard-and-fast rule: Protect the Children. But now the newest strain of technoceutical drugs–specifically designed to alter psychic children’s DNA–has thrown the arcane black market into a frenzy. As mistress of the House of Swords, Sara pits the power of her worldwide criminal syndicate against insidious enemies and even more treacherous allies to combat the threat. Unfortunately, it’s not enough. To destroy these drugs at their source, she must break her cardinal vow and put a child at risk.

Guided by a boy irrevocably altered by the technoceuticals, Sara races to derail the modernization of an ancient ritual devoted to a malevolent god. Except the children aren’t her only responsibility any longer. The Magician of the Arcana Council and her own House demand her focus as the war on magic erupts violently in several hot spots around the globe. Sara’s pretty sure things can’t get more complicated, until she discovers who is leading one of the other four fabled mortal Houses of Magic…a discovery that brings her face to face with the mother she’s never known.