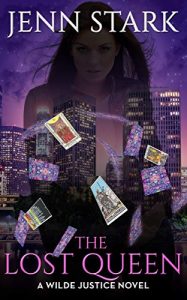 Not all who wander are lost.

As Justice of the Arcana Council and an experienced artifact hunter, Tarot-reading Sara Wilde prefers to track down the missing on her own. With her latest case, unfortunately, everyone’s dying to help her out.

Determined to locate the Lost Queen, a witch destined to fulfill a dark and twisted prophecy, Sara finds herself corpse-blocked at every turn. Not even the electric, provocative, and deeply powerful Magician of the Arcana Council–whose newest arcane pursuits test Sara’s emotional and sensual boundaries–can help her find her mark.

Worse, Sara isn’t the only hunter on the case. From the shadowy labyrinths of Budapest to the ancient churches of Moscow to the glittering lights of Los Angeles, the world’s most powerful male witches are gunning for the Lost Queen, demanding her as their rightful consort. Right before they end up dead, each more gruesomely than the last. There’s definitely a pattern here…and one Sara needs to break, before her own mercurial Magician becomes the prophecy’s next target.

Better hope you don’t find what you’re looking for when you hunt The Lost Queen.