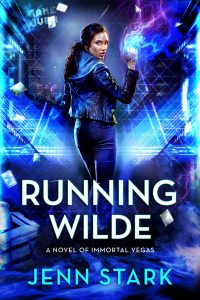 It’s not about the cards you’re dealt…

Mistress of the House of Swords Sara Wilde finds herself the rising star of Interpol’s Most Wanted list–accused of acts of supernatural terrorism and psychic manipulation, a new category of offenses clearly created just for her. Unwilling to drag her friends into danger, Sara’s on the run, desperate to find solutions to the coming war on magic while keeping one step ahead of the authorities.

Interpol isn’t Sara’s only problem, however. While shoring up relations with old allies and updating her intel on the gods and monsters of the Connected black market, she unexpectedly acquires tools of world-ending power…tools that place her squarely in opposition with the Magician, the one being on earth she truly loves. Worse, everywhere Sara turns, she encounters fierce young psychics who seem to know more about her actions than she does…and whose inside information comes with the hint of devastating betrayal.

As Sara struggles to master both her own abilities and those of the extended Connected community, she realizes everything she thought she knew…about the Arcana Council, the Houses of Magic, the Magician, and especially herself…was spectacularly wrong.

How you play your hand can kill you when the game is Running Wilde.