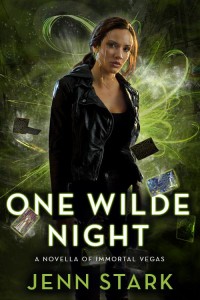 No one could say I didn’t have enough skin in the game. Not for this job.

I inched forward, barely squeezing between two bare-assed naked women. They writhed in vigorous counterpoint to the pounding music, D cups smacking me full in the face. Thanks mostly to the heavy oil I’d slathered on myself from neck to toe, I wriggled my own naked body free of their apparent Twister competition to claim exactly one square foot of open space in the sub-basement rumpus room.

The throng of nude humanity spun out in all directions around me, a mosh pit of groaning decadence. All of them were dancing. Some of them were fornicating. And one of them was damned well thinking she should have asked for more money for this assignment.

“Mmm, Deusa.” The thickly-accented Portuguese word purred past my ear. Heavy hands latched onto my shoulders and with a quick jerk, I was pulled ass to groin against a particularly enthusiastic admirer. Again with the help of my oil, I turned in the guy’s embrace and smiled as wide as I could, my gaze raking over his face.

Nope, not my target.

Nope, not anyone I recognized from the trade.

I pursed my lips into a kiss, then brought down my heel hard on the guy’s instep, gut-punching him a little lower than his gut. He fell back, releasing me with a high-pitched squeak of pain. Turning back around, I plunged deeper into the crowd, desperate to get to the center of Crazytown before I got trapped again.

The music blasted with the interminable samba strains that had pretty much been encoded into my DNA over the past four days. It was Carnival week in Rio de Janeiro. Ordinarily, that would find me with my fingers wrapped around a beer at a local block party, dancing in the street and eventually passed out on some beach south of the city.

Not when there was fifty grand at stake for a chunk of jadestone now only twenty feet away from me.

I slithered between two heavily oiled male backs, one boasting some really impressive ink. Etched in vibrant greens, blacks, oranges, blues and golds, a rugged sun god looked right at home between a pair of the most amazing shoulders I’d seen in recent memory. The god presided over the flowing waters of the Amazon, which in turn cascaded down to an exceptionally fine ass. An ass now twitching against my—

“Is that truly your target here, Miss Wilde?”

I popped into another pocket of air, turning fast to defend myself. But there was no one leaning into me, whispering in my ear. There was no one paying attention to me at all.

The voice had been in my head.

“You’re getting annoying.” It took a pretty amped-up psychic to play phone-a-friend with my mental receptors, but there were plenty of high-level Connecteds who could do it when I was distracted.

I’d picked up the anonymous psychic passenger when I’d first landed in Rio, and hadn’t been amused that he’d known my name, especially since I had yet to figure out his. After his initial contact and a pretty amazing lucid dreaming visit, however, he’d gone silent long enough that I thought he’d slunk off to haunt someone else’s brain. Him showing up tonight was crappy timing, but I couldn’t spare the mental energy to repair the shields right now. The dilithium crystals would have to hold.

I turned back toward the center of the room. For good luck, I patted the one thing I was wearing, a thick frog-shaped pendant on a leather cord, made to order for tonight’s assignment. Almost all the women in the room wore a similar amulet, and nothing else. In my case, though, a second leather cord held my ponytail. A tug confirmed it remained in place.

The lights of the enormous subterranean chamber shifted, pointing the way to my target. On a small stage in the center of the room, an exquisite woman stood in the middle of three highly dedicated attendants, all of them male, all of them built like Mack trucks.

I’d been following Fernanda Rossi for the past three days since I’d locked on to her at the Magic Ball at the Copacabana. To the adoring public, she was simply one of this year’s most beautiful and vivacious Carnival princesses. According to my client, she was also a priestess in the Cult of Icamiabas.

Based on what I was seeing now, my client was right on the money.

Standing on her dais, Fernanda looked every inch the dominant Amazonian high priestess. And tonight was her night to shine.

Her and her necklace of supreme power. Or whatever it was.

A carved jadestone frog dangled from a thin leather cord from Fernanda’s neck. That frog was currently having the time of its life bouncing around on the woman’s impressive assets as she was alternately kneaded and stroked and kissed and licked and a few other things I needed to remember for later.

Granted, there were approximately seventeen million similar frog charms being sold in the streets of Rio this very night. But this one, my client had insisted, was different. This one contained powers far beyond the norm. Powers of fertility, yes—hence the sexapalooza going on around me. But also transcendent powers of luck, health, abundance, and long life. And maybe even a set of steak knives.

Ordinarily, I wouldn’t waltz into a religious cult’s crib and take their prize, at least not while they were still worshipping it. Most of the relics I secured for interested buyers were from long-dead tribes or forgotten family vaults. However, this particular strain of devotees rubbed me the wrong way. According to my client and verified through my Connected buddies south of the equator, these guys weren’t just a Brazilian sex club rocking it old-school. They demanded sacrifices too. Generally big brawny male ones.

Being a fan of big brawny males, that didn’t sit right with me. The world didn’t have enough of those as it was.

Adding to my motivation, my client had already transferred two-thirds of my fee into my bank account, not twenty-four hours before the start of Carnival. I needed that money, badly.

So I was going to nail this payday.

I pressed forward through the crowd, trying to keep my chin up, my focus on the prize and not on the naked rave around me.

Fernanda had been criminally easy to track, at least. Her samba “school,” a loose group of neighborhood residents who competed in the Samba Parade at Carnival, had been putting their lovely princess on display across the city in ever more flamboyant costumes. Each appearance had been tailor-made to build buzz for their triumphant parade through the Sambadrome later tonight, when Fernanda would be dancing her ass off in an elaborate headdress and very little else. She’d rolled out her particular version of the samba at every promotional stop throughout the city, like a mama showing off a jiggly baby. It made me exhausted to watch her, but I’d stuck to her like white on snow.

And when she wasn’t on some stage shimmying her tan off, I’d been able to peg her location with a few well-chosen Tarot cards.

Tonight in particular, my cards had been straightforward and clear: The Tarot trump Justice had led me to a coffee shop next to the old capital district, the Fool had taken me to the Municipal Theatre, which was playing Parsifal—and the Devil had helped me find this hellhole, O Diabo. Where I’d struck pay dirt.

The one card that hadn’t been played out in an obvious way was the Magician. Since the “finding” part of this little adventure was all but over, however, I really hoped it meant I was performing at the top of my game.

I’d make the switch in the next few minutes, hole up for the night, then meet my client as planned tomorrow morning. Simple. Clean. Easy.

A new sound brought my head up with a snap. Either Fernanda was miked up or the acoustics in the room were unreal, because her multisyllabic moans were the stuff of legend. Bracing herself on the shoulders of one pair of men while another grabbed her hips, the princess gave a five-star shudder, then cried out with pure, undiluted, triple-X-rated pleasure. Loudly. And at length.

The crowd around me answered back with a roar of its own.

Clearly, it was party time.