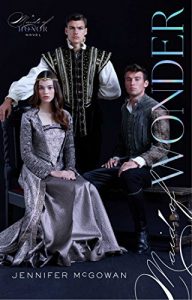 Sophia Dee, the most unusual spy of Queen Elizabeth’s Maids of Honor, has run out of time for her psychic skills to fully manifest. A terrible new prophecy now haunts Windsor Castle, and the Queen demands answers before the next doomed soul dies.

Thrust into a dangerous and horrifying competition to solve the deadly prediction, Sophia finds herself pitted against the most celebrated mystics of Europe: John Dee, her devious uncle and the Queen’s personal astrologer. . . and Nostradamus, the renowned prophet-seer of France.

In a court where whispers of witchcraft, poisonous plots, and grim assassins threaten her at every turn, Sophia needs answers fast. But does she dare trust Marcus Quinn, her uncle’s striking and over-ambitious assistant? Or, instead, should she turn to the tortured dark angel of the spirit realm, who whispers to her only of sorrow and death?

As new dangers surface and dire prophecy sweeps toward its final victim, the five Maids of Honor prepare to do battle. Only then will the girl who so often sees the future finally discover if she can save the Crown—and herself.