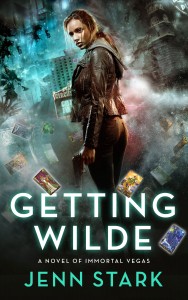 The Devil was in the details. Again.

I leaned against the sticky countertop at Le Stube and glared down at the faded Tarot cards, the best Henri could scrounge up on short notice. The Devil trump looked particularly foul in this deck: all leering grin, fat belly, and clawed feet. Worse, it was the third time in as many days he’d shown up in my reading…and this time, he’d brought along some friends. I’d turned up the Tower, Death, and the Magician card in quick succession, heavy hitters of the Tarot who had no business being in my business, at least not tonight.

Tonight’s transaction, while unpleasant, wasn’t supposed to be complicated. It wouldn’t be complicated, I’d decided. I’d had enough of complicated for one evening.

Le Stube’s front door opened. I sensed Henri looking past me with his sorrowful bartender eyes—just as I caught a whiff of the guy coming in. I sat up a little, blinking rapidly. Dude was pungent. Even by Parisian standards.

I tapped the Prince of Coins card lying in the middle of all the Major Arcana cards. It was covered by the Five of Wands. So I was pretty sure this newcomer was my contact: some low-level knuckle dragger muling cash for his king, the buyer who’d commissioned this deal, here to relieve me of the artifact I had snugged up against my right kidney. Unfortunately, I was also now pretty sure said contact was spoiling for a fight. Which might become an issue, since neither prince nor king was going to get his trinket, if the payoff wasn’t right.

Not my problem, though. I wasn’t the one who’d lied.

“Un autre?” Henri sighed. Henri was a master of the resigned sigh.

I swept the cards into a stack and nodded to him, then pocketed the cards. It wasn’t the prettiest deck, but it was trying, at least. I owed it a one-way ticket out of Paris. Henri plucked my glass from the counter, making a big production of concocting something that looked entirely too involved to be my drink. He set the mess down in front of me and scowled, gloomy concern evident in every line of his thin, hunched body. Which is more than I could say for the guy now shuffling up to the bar, stinking of sour cheese and bad karma, and maybe one too many glasses of cheap merlot.

I barely avoided a wince as he sat down. “You have it?” he asked.

“You didn’t tell me about the competition,” I said, picking up my glass. “The price has gone up.”

“You do have it.” He leaned toward me, his gun nudging into my side. Henri had shifted away for the moment, giving us the ol’ cold-shoulder routine. As if nothing that happened here would bother him, as long as I kept it tidy.

I could do tidy, I decided. The cards and their crazy were not the boss of me.

“If you have the money, then we still have a deal,” I said, Miss Congeniality all the way. “Just at double our original price. What’s more, I suspect you do have the money, honey, because you knew what I was walking into. Unlike me, for the record. Which, frankly, wasn’t very neighborly of you.”

The man shifted beside me. “You agreed to the terms.”

I shook my head. With the mule this close, we could talk freely without being overheard. If only I could manage it without breathing. “No,” I said. “I agreed to lift a minor, plate-sized relic off a clueless museum intern. You missed the bit where said flunky was also being targeted by the Swiss Guard, who, by the way, apparently don’t wear pajamas when they’re not at the Vatican. You also missed the part where the Swiss Guard had become ninjas. All that’s a little out of my pay grade.” I took a sip of my drink, wincing at the tang as I set the glass down again. Horseradish. Nice. If I had to use it on this guy, it was going to sting like a bitch.

“But you have it,” my contact said again, indicating that he was prepared to get what he wanted simply by boring me to death. I glanced at him again. He was powerfully built, with a thick jaw and a boxer’s nose—only now his curled upper lip was sweating, his beady eyes looked a little coked up, and his cheeks were flushed. Something wasn’t right here. He was too nervous, too intent.

“The transaction was compromised.” I shrugged. “I wasn’t given full information. With full information, I never would have taken the job. But, I can be reasonable. Which means your new price is only double. So go talk to your boss, get the extra cash, and then we’ll have something to discuss.”

“No.” Again with the gun. Harder this time. Sharper. “You must give it to me now.” The man had turned almost feral with intensity, and my Spidey sense went taut. This definitely was too much reaction for the relic in question. We weren’t talking the Ark of the Covenant here, no matter how much I was going to charge the guy. I reclaimed my glass of horseradish whiskey and took in Henri. He was still at the far end of the bar, well out of the way of any untoward blood spatter. Very efficient, our Henri.

“Take it easy, my friend,” I said, as casual as all hell. “We’re just having a conversation.” It wouldn’t be long now, I thought, watching his nostrils flare. The cards felt heavy in my jacket pocket. The glass felt heavy in my hand. And the golden seal of Ceres suddenly weighed a hundred pounds in its slender pouch against my body.

It was a pretty thing, really: a flat gold disk the size of a dessert plate, imprinted with an image of the Roman goddess of fertility and grain on one side. On the flip side, a half-dozen thick, raised symmetrical ridges lined its surface at odd angles. Not the most spectacular artifact I’d ever been asked to locate, but not the most mundane either. With the help of the cards, I’d tracked it down fairly quickly, even for me.

Still, I maybe should have asked a few more questions before I headed out this evening. A third-century BC seal featuring a corn-festooned pagan goddess shouldn’t have been entrusted to your average intern for a late-night museum transfer. And the guy had seemed really young too. Too young, too clueless. Which might have caused me to stop and reconsider what I was doing, if I hadn’t been so distracted by the ninja shadows of death who had swarmed the Metro platform the moment I’d made the grab. I’d immediately thought the Swiss Guard had come to swipe the relic out from under me, but why? What had I seen to tip my mind that way?

And why would the Swiss Guard care about such a minor artifact?

“Give it to me,” my contact hissed, officially signaling the arrival of the next stage of our negotiation process: brute force. Then he lunged at me.