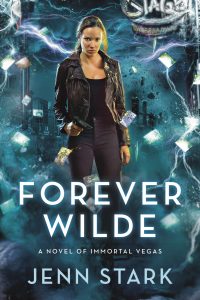 Life has never been smoother for Tarot-reading artifact hunter Sara Wilde. With a worldwide criminal organization at her beck and call, she can finally secure the safety of the youngest and most vulnerable members of the psychic community. Sure, she’s been banged up a little, and the Magician’s most recent attempts to heal her turned her temporarily immortal. But otherwise…things are coming up roses.

Then Sara discovers an enclave of psychic children whose DNA has been dangerously altered, making them the hottest targets on the planet for traffickers. A new strain of technoceutical drugs is flooding the arcane black market, and powerful Connecteds, the Arcana Council, and even Interpol are intent on discovering its source. To protect the children and her House, Sara joins the hunt. What she discovers, however, causes her to question everything she knows about the war on magic and her own deeply-buried motivations.

Still reeling from those revelations, Sara reluctantly partners with the Magician to find and retrieve the most elusive member of the Council, the Hanged Man. Working together far too closely for comfort, Sara learns a series of startling truths about the mercurial, exasperating, and manipulative Magician–including one secret that could finally give her the answers she most craves…if it doesn’t destroy her first.

The hits just keep on coming when you’re Forever Wilde.