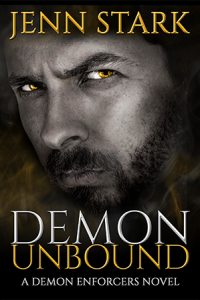 None of us is without Sin…

After serving untold millennia as the leader of a demon special ops team with a brutal reputation for efficiency, Warrick of the Syx has seen it all, done it all, killed it all. Penance for his own damnation? Sure. But with the world running black with blood and magic, his skills are definitely in high demand.

This time, though…there’s a catch. And her name is Maria Santos. Beautiful, badass, and out for blood, Maria’s wrestling with her own dark secrets. The kind of secrets that call to Warrick’s twisted soul. A call he knows better than to answer.

Unfortunately, the dangerously tempting undercover cop is Warrick’s only ticket into the lockdown hellhole where a particularly vicious demon faction is boiling over, ready to unleash a new Armageddon on earth. If he wants to get at them, he’s going to have to take Maria with him.

But the second she gets caught in the crossfire between Warrick and the scum of eternity, well…