Born to Be Wilde 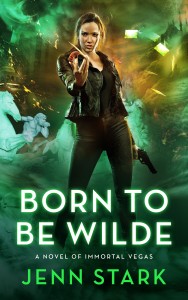 The past has a way of catching up with you.

If there’s one thing that Tarot-reading magical artifacts hunter Sara Wilde has never been able to track down, it’s the truth about her own past. But now a powerful new threat to the psychic community will take Sara back to where it all began: the last job she worked with Officer Brody Rooks as “Psychic Teen Sariah,” the job that destroyed her life and sent her on the run. Because the enemy she fled all those years ago has returned… with a posse of demons as his personal entourage.

Worse, Sara’s infuriating mentor, the dangerously seductive Magician, is pushing her to stretch her abilities and explore the very deepest reaches of her magic. But every demand draws her further into the spell he’s weaving around her. And every challenge tests her vow to keep him at arm’s length.

From the glittering chaos of Las Vegas to the Lost City of Atlantis, Sara must risk everything in a quest for vengeance that grows darker and more twisted with every step. To succeed she’ll have to face the truth about her past, her abilities…and the impossible, unstoppable attraction she has to the Magician. A truth that will reveal her ultimate role in the war on magic.

Life is full of surprises when you are Born to Be Wilde.