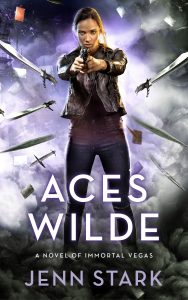 Never play the game without an Ace up your sleeve.

During her years of finding and selling artifacts on the arcane black market, Tarot reader Sara Wilde has made a bona fide killing. Now, as the recently appointed head of an ancient Connected syndicate, she’s forced to take a truly deadly role in the war on magic.

Within the House of Swords, every blade cuts deep. Usurpers and claimants attack from all sides, while the Magician’s insidious pull on Sara becomes ever more twisted and beguiling. As she struggles to strengthen her position and manage her new, unwieldy abilities, Sara discovers her greatest challenge yet: a master warrior determined to deliver the syndicate and everyone it protects to its mortal enemy.

Bolstered by an unexpected Ace and a mystical sword, and faced with a round-the-world race to outmaneuver friends and foes alike, Sara’s future balances on a merciless edge.

The cards can cut both ways when you play ACES WILDE.